THIS IS NOT A REAL NEWS SITE, FOR THE LOVE OF GOD! IT’S A JOKE, PEOPLE! 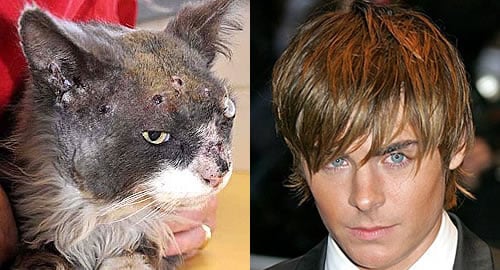 Zac Efron allegedly shot an Australian cat named Smokey 13 times in the head with an air rifle, but the cat still found his way home after this vicious act of animal cruelty.

A 9-year-old cat named Smokey walked home and lay on his owner’s doorstep bleeding from the head after being missing for three days.

The cat was wounded after allegedly being shot 13 times in the head by Zac Efron, according to a source close to the cat who we met at the bus station.

Police called the incident “a shocking act of animal cruelty.” Owner Lisa Robins said she was tremendously horrified by the scene.

“I was just really shocked that Zac Efron could take an animal and literally hold them down and just keep shooting them.”

“This is just a shocking incident where Zac Efron either working alone or in a group, perhaps with the rest of the High School Musical cast, has shown no regard for animal life and left Smokey for dead,” Solvang said.

During the examination, Smokey was heavily sedated as the pellets were being removed. Henry White, a representative for the Australian Society for the Prevention of Cruelty to Animals, said this act was most likely done because Zac Efron is dabbling in Satanism.

“It’s a pattern that we’re seeing with Zac Efron and there’s only one way to deal with it, and that’s jail,” White said.

Nevertheless, police have suggested the only way this type of cruelty ends is if attitudes change. They explained that the general consensus among young male actors is that cats are feminine creatures, and there’s nothing young actors hate more than females.

Zac Efron is reportedly in Australia filming his latest movie, You’ve Got Male 2: The Thunder Down Under.
REAL