Zac Efron Is Totally NOT Gay 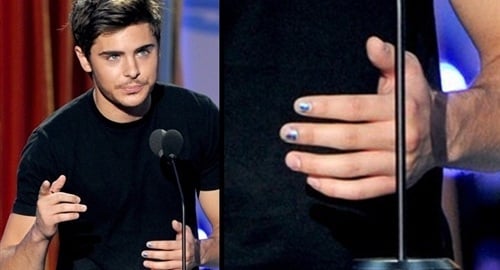 Guy’s guy Zac Efron was at it again being totally not gay at the Teen Choice Awards. This time the tough guy Efron maned it up by sporting blue nail polish and only a minimal amount of makeup.

Zac Efron couldn’t have looked more butch and heterosexual as he flailed his beautifully painted limp-wristed hands to the audience.

This should put to bed once and for all those nasty rumors that Zac Efron is gay, and that Vanessa Hudgens has been his beard for years while he goes around sucking c*ck at truck stop men’s rooms.

Now all you haters can clearly see that Zac Efron is a completely straight guy who loves painting his nails, styling his hair, singing musicals, and performing in plays and movies.