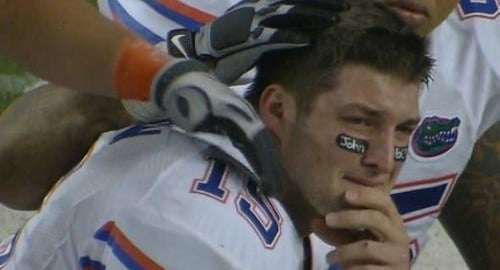 After a disastrous performance by Tim Tebow at the Senior Bowl on Saturday, the group behind his controversial Super Bowl ad says it is changing its’ message.

Originally the ad was supposed to feature a Pro-Life message with Tim Tebow’s mom Pam Tebow reciting the story how she ignored her doctor’s suggestion to terminate her pregnancy of Tim. However the theme of the ad has now changed according to Mitch Adel, the CEO of the group who payed for the Super Bowl spot. He released this statement earlier today:

“After watching Tim Tebow’s sub-par performance at the Senior Bowl yesterday we have decided to change the message of our Super Bowl ad featuring Tim and his mom Pam. I think it was pretty obvious to anyone who watched that game that Tim is a 3rd to 5th round draft pick at best, and probably should have just been aborted.

You could say it was kind of a road to Damascus moment for me. I now see that we need abortions, and hope that our commercial, featuring a guy who will never make it as a starting QB in the NFL, will help young mother’s out there to do the right thing, and throw themselves down the nearest stairwell.”

Dr Ching the OB/GYN who originally suggested to Pam Tebow that she should terminate her pregnancy of Tim has been staunchly defending his medical recommendation for years, saying:

“Looking at Pam’s ultrasound and watching Tim’s movements and brain development in the womb I could tell he would have an elongated throwing motion, and would have trouble taking snaps under center as well as reading through progressions against an NFL defense. That is why I suggested to Pam that she terminate the pregnancy immediately less she give birth to a disappointment. Sadly she didn’t listen.”

The debate on whether Tim Tebow is an NFL quarterback or if he should have just been aborted 22 years ago will rage on. However, if Tim’s fundamentals do not start improving by the NFL combine I wouldn’t be at all surprised if his mom Pam just goes ahead and has him aborted before the NFL draft to save herself the embarrassment.