Selena Gomez Calls For The Destruction Of Israel

Selena Gomez confirmed her allegiance to Islam (see her new Arabic tattoo here), by calling for the destruction of the Satanic state of Israel with the posting of the photo below to her Instagram. 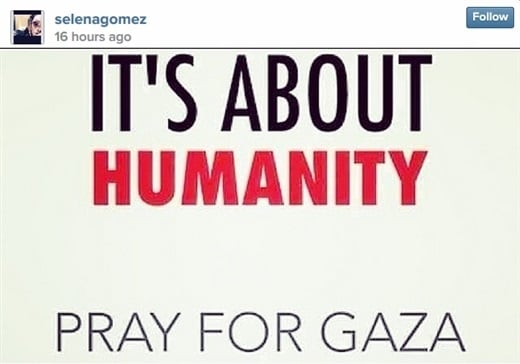 The message in this photo is very clear. “It’s about humanity” means that Palestinians are actual people unlike the devilish Israeli sub-human Zionist oppressors. While in “Pray for Gaza” the word “pray” is an obvious pun on the word “prey”, and thus Selena is saying that Jews should be hunted down and turned into prey for the protection of the Gaza Strip.

Of course Selena Gomez stopped short of blatantly calling on all her “Selenator” fans to kill every Jew they could get their hands on, but it would probably be safe to assume that she wouldn’t be displeased if they did *wink *wink.