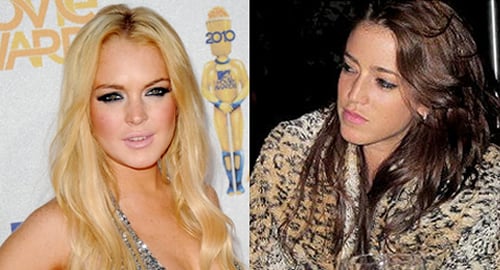 We all know that the Jews are behind the financial crisis and all of the world’s wars. But now we have confirmation that the Zionists are involved in an even more sinister plot: the corruption of Lindsay Lohan!

Need proof? Look no further than Lindsay’s new body guard, a former Israeli soldier named Eilat Anschel. The tabloids are reporting that this sexy Semite is more than just a protector, and Lindsay is “totally obsessing over” Anschel. Couple this with Lindsay’s last lover, noted Lez-Jew Samantha Ronson, and we have ourselves a full-blown conspiracy!

Clearly, Ronson and Anchel are deep cover Mossad agents who are part of an ongoing mission to corrupt Lohan. After all, if the press is focused on Lindsay and her antics, they are less likely to report on Israeli atrocities such as flotilla shootings and the eating of Palestinian babies.