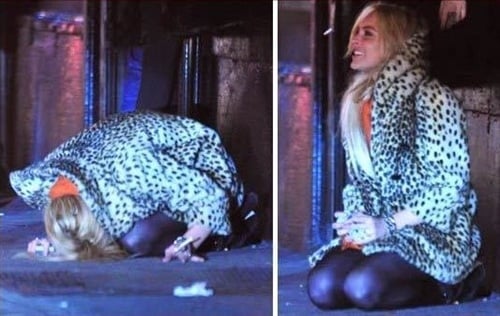 By Muhammad’s beard this is shocking news! Noted drug addicted, lesboqueer, and bitch Lindsay Lohan has seen the light and converted to Islam!

As you can see in the photo above Lindsay Lohan’s “road to Damascus” moment came while out clubbing in Hollywood last night. Lindsay was overcome by the power of Allah and dropped to her knees and started praying to him right on the sidewalk. By the smile on her face you can tell she now understands the joy of accepting Allah as her lord and master, and will be reforming her former degenerate heathen ways.

Lindsay Lohan joins fellow celebrities Miley Cyrus and Sarah Shahi as the only devout Muslims in Zionist controlled Hollywood. Let us hope she shows the same level of commitment to Allah that they have shown. Allahu Akbar!