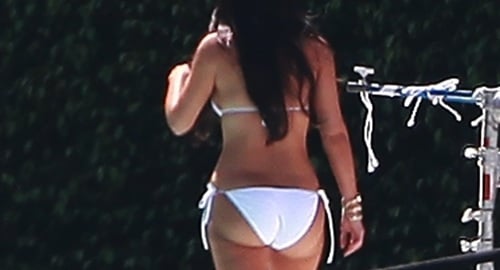 Look at this picture of Kim Kardashian’s big ass in a white bikini. Any number of soccer mom’s in America have wider and fatter asses than this, yet Kim Kardashian’s is continually revered by the brainwashed masses.

By any objective aesthetic Kim Kardashian is not an attractive woman. She has a horse face, she has to constantly wear a corset or push-up bra to keep her saggy boobs from hitting the floor, and her doughy pear shaped lower body is so common in the States that even I, a humble Jihadist goat herder from Afghanistan, could easily go to a bar and pick up a woman with an equally ample backside.