Jon Minus Kate Plus Skank 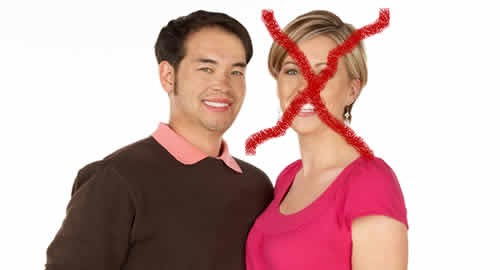 Jon Gosselin can add another notch to his bed post.

America’s favorite Asian reality-TV father of eight was spotted at a Pennsylvania bar and restaurant with yet another 20-something woman. This is the third skank he has picked up since splitting with his awful, soon-to-be ex-wife, Kate Gosselin.

The unidentified woman drove herself to Jon’s home at 3 a.m. and was spotted leaving the property at 6 a.m. The fact that Jon brought the girl to a home used by the family is sure in infuriate Kate who, despite her overall awfulness, is gaining public sympathy as a result of Jon’s philandering.

While different media outlets debate about who is responsible for the break up, CelebJihad isn’t afraid to place the blame squarely where it belongs: with the children. Everything was fine until those little bastards came along. But now mommy and daddy don’t love each other anymore. We’ve seen it a thousand times before. Kids ruin everything. Way to go, you little monsters. We hope you’re happy.