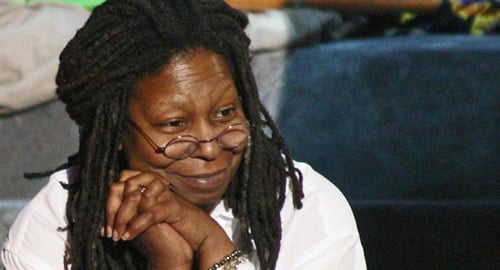 Whoopi Goldberg is our hero. She’s the only one with the guts to stand-up for the wrongfully persecuted director, Roman Polanski.

What is it with Americans, anyway? One 13-year-old girl gets drugged and sodomized by a guy in his 40’s, and everyone is up in arms? I mean, are we living in the dark ages?

In more sophisticated countries like Albania and my home country of Saudi Arabia, girls this young are already married, divorced, and in a few cases, stoned to death. But here in the so-called land of the free, we have to wait until they turn 18 to force ourselves into their Hershey Highway? You’re all hypocrites!

And even if Polanski is guilty, hasn’t the man suffered enough. All of these years he’s been forced to live in Europe and make movies. God knows how many models he had to nail. And to top it all off, the poor guy married a super-hot chick and had kids with her. Do we really want to persecute this broken-down old man any further?

At any rate, I’ll let Whoopi take it from here. She’s much more articulate than I am. Here’s a clip of her explaining things on The View. YOU GO GIRL!