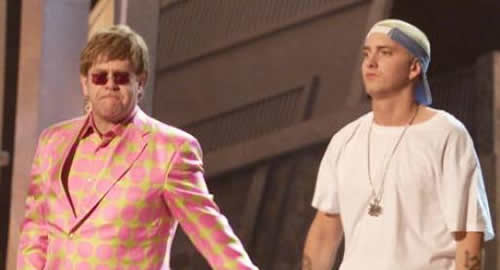 Despite his wealth and power, there’s still one thing that money can’t buy for Elton John: a Ukrainian AIDS baby. In fact, it would be much easier for Sir Elton to go out and get AIDS than it would be for him to adopt an AIDS infected child.

John (pictured left) and his gay lover, David Furnish (pictured right), will not be allowed to adopt because Ukrainian law prohibits unmarried couples from doing so. Also, the age limit for prospective adoptive parents is 42. John is 65. The fact that Elton John is an asshole did not factor into the decision.

I for one applaud the Ukrainian government’s decision. First off, AIDS babies are a valuable natural resource which the Ukraine is wise to protect. Secondly, the Qur’an strictly forbids gay pop stars from adopting AIDS babies, and for good reason. Just think of the decadent life-saving drugs those rich sodomites might try to give the child. The boy is much better off in a Ukrainian orphanage eating gruel and slowly losing his immune system.