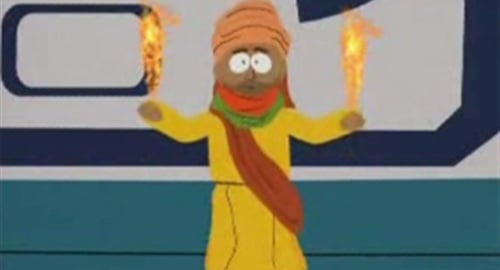 We here at Celeb Jihad would like to congratulate Comedy Central on doing the right thing and censoring the latest episode of the heathen show “South Park”, which continues to commit blasphemy against the blessed Prophet Muhammad.

It takes a big man to immediately cower in fear from vague anonymous threats made on the Internet, and Comedy Central has just shown that they are run by extremely big men. Some people cowardly face down danger over principles like free speech which they believe are worth defending. However, that reeks of womanly stubbornness. A real man knows to retreat immediately at the first signs of danger.

Comedy Central did the right thing by giving in over the South Park episode. Even though the vast majority of Islamic extremists are illiterate, have no television, and live in 3rd world countries, we are a terribly powerful and threatening group. Westerns would be wise to follow Comedy Centrals example and not cross us, less we go online and issue hysterical fatwas against you. Allahu Akbar!