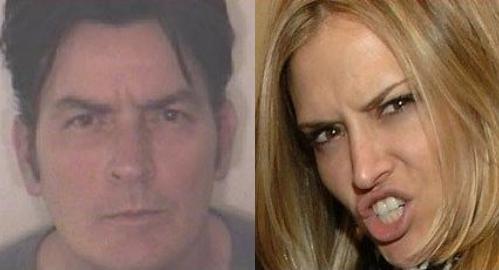 Charlie Sheen’s wife Brooke Mueller called police on her husband Christmas morning, and claimed he had assaulted and choked her. Charlie Sheen was arrested for felony second degree assault, and spent most of Christmas day in jail.

Sources say authorities gave both Charlie and Brooke blood alcohol tests. Brooke registered a .13 while Charlie registered a .04 (which is the amount of alcohol permanently in Charlie Sheen’s system without having a drink). Brooke then recanted her story to a female officer just before Charlie’s bail hearing, telling the cop she was very drunk when she made the 911 call.

Celeb Jihad has learned that Brooke Mueller has just stumbled into the police station with tinsel stuck to her hair, and carrying an empty bottle of Goldschlager (or as she calls it “Christmas juice”) and is accusing Charlie Sheen of murder.

Brooke has let loose a string of accusations against her husband including that he is a “stupid face”, “couldn’t f*ck his way out of a paper bag”, and that he “killed Jon Benet Ramsey”. She apparently wants to press charges on all 3 counts. Police are now conducting a manhunt for Sheen who they will most likely shoot on sight.