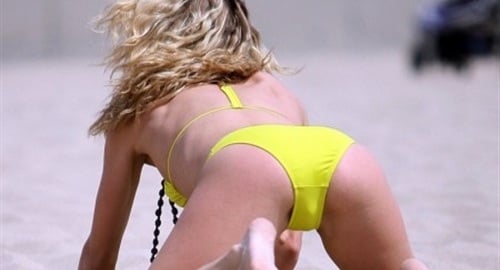 AnnaLynne McCord the star of nothing you have ever seen before, was attention whoring it up at the beach this weekend.

AnnaLynne, who has every paparazzi’s phone number on speed dial, showed up at the beach in a small bikini and proceeded to pose in various sexual positions. She also basically made out with her sister during a game of volleyball .

If you look closely at the pictures below it appears that AnnaLynne McCord has either a really fat pussy or she has a tampon sticking out. Either one could be a turn on depending upon who you talk to, but based on the size of the lips on her face my guess is option one.