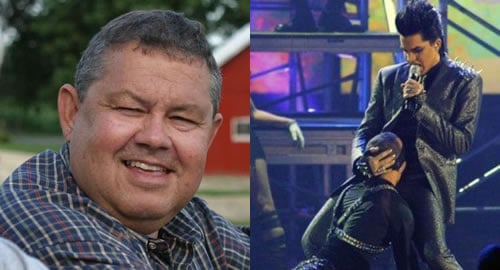 Chuck Lambert, father of “American Idol” runner up Adam Lambert, is not looking forward to Thanksgiving. Sources close to Chuck, a retired union electrician, say that Adam’s recent performance at the American Music Awards has sent him into a tailspin.

“Ya see that guy on T.V. prancing around like Elton John and making out with other dudes?” said Chuck as he took another swig of his Seagram’s VO Canadian Whiskey. “Yep, that’s my boy!”

With each passing day Chuck seems to grow more and more worried about the upcoming holiday, a fear that is further exacerbated by the constant taunts he receives about Adam from his fellow electricians.

“I mean, what the hell are we going to talk about during dinner?” Chuck said. “Son, I saw you on TV last week at that award show shoving some dude’s face into your cock and balls. That looked like fun, tell me about it. Jesus Christ, what did I do to deserve this?”

Added Chuck, “Why couldn’t he just be one of those normal queers like Tom Brady.”